I had heard of the Green Corn Rebellion of 1917 before.  It was mentioned in passing in histories of the US labor movement, histories of the radical movement, and histories of Oklahoma.  Right here, in my first paragraph is a logical place for another brief summary or characterization, like those I read in the works above.  But my inability to decide how to summarize or characterize is precisely my point today.

The lists of those arrested for participating includes whites, Natives and African Americans.  What were they fighting about?  Contemporary accounts cite the draft, but also talk about the entire capitalist order.  How did they unify in a state that would soon be a center for the Ku Klux Klan and the site of the Tulsa massacre?  The newspapers of the time mock them as cowardly and comical in the same paragraphs in which they demand harsh punishment.  Who, really, were these people?

During the first World War, our governments filled federal and state prisons with all sorts of dissenters.  They were convicted under a new "Espionage" Act as "enemy agents" for opposing the war or the draft, although some were actually targeted for other reasons entirely, such as advocating unions.  So many of these nonconformists were incarcerated in Leavenworth Penitentiary in particular in those years that some historians have called it a "university of radicalism."  Leavenworth housed Mennonite conscientious objectors, Socialists, IWW's, and AFLers.  There were Mexican revolutionaries like Ricardo Flores Magón.  Members of the US 24th Infantry who fought racist Houston cops were locked up here if they escaped execution.  And there were leaders of Oklahoma's Green Corn Rebellion, too.

These incarcerations in Leavenworth turn out to be a rich resource for readers because the prison authorities kept good records including photos.  And given the paucity of good information about who those "green corn" rebels were, and what they were fighting about, that is a help.  Archivists at the National Archives in Kansas City sent me scans from the jackets of Price Street and Ira Hardy, two of the incarcerated rebels.  They give me the men's infirmary and disciplinary records, their height and weight.

I learn that Price Street spent months working in the prison's brickyard and quarry.  He was disciplined by guards for failing to deliver burlap sacks as ordered and for lying about it.  They 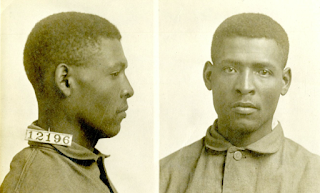 subsequently discovered that he had mistakenly brought them to the wrong cellblock, B instead of D, which is unsurprising when one remembers that he had no schooling whatsoever.  There is also a great deal of correspondence in his jacket between the prison and his draft board.  Apparently the local board of Seminole County wanted to prosecute him for failing to report.  The warden of Leavenworth had to inform them that Mr. Street would not be allowed to report for the draft while incarcerated in his institution.  One letter wasn't enough.

Ira Hardy spent most of his prison time working in the power house, I suspect shoveling coal.  He caught the flu in the big epidemic, but survived.  He was disciplined once for refusing to take several wheelbarrow loads of cinders out of the powerhouse.  He took them out after being written up.

So what do I actually learn from any of this?  After looking through it a few times I noticed the list of correspondents to each man.  And that reminded me about the tools of genealogists: census records, draft records, marriage records, death records.  Because these people who wrote to Mr. Hardy and Mr. Street while they were at Leavenworth might help me put together a picture of their lives.

Think about it.  Google "Price Street" and you will find the addresses of homes for sale all over the country.  Get it? Price St.  Google "Ira Hardy" and you will find social media accounts and doctor's offices.  Even familysearch.org is less helpful than you might think.  Between the challenged spelling skills of the enumerators and the quick readings of the LDS transcribers, Price Street turns into Prise Street and Price Strut in the indices.  I only found those when I searched using his wife's name, Missie Street, and I only found that in his prison records.  And Ira Hardy is invisible in the census until you use the first name "Arie" which I found, again, in the prison records.

Following Missie Street allowed me to see why Price, an African American man, was receiving correspondence from Randolph Cudjo, an enrolled Seminole Indian of African descent.  It also showed me why twenty years later Randolph Cudjo was listed on Price Street's World War 2 draft registration as the person always knowing his address.  I realized that Missie Street, née Davis, was also on the Dawes Rolls as a Seminole Indian "freed" person.  Her allotment was adjacent to Randolph's.  I did not learn how she was robbed of her allotment, but her husband Price's status as a tenant farmer -- at the time of both world wars -- tells me that she did indeed lose her land.

There is more.  I found out that one of the Seminoles jailed for the rebellion, "Coffee" Harjo, (a full"blood", not a "freedman) subsequently served in the US Army and was gassed by the Germans.
(And finding him listed as "Guffe", "Cuffy", "Coffey", and "Cuffie" was truly an adventure.)  I found out that he was the brother-in-law of another "blood" Seminole charged for the rebellion, Josie Marpiyecher.  And I found both their signatures on a petition to the Bureau of Indian Affairs asking that underage Seminoles not all be assigned white guardians to "protect" their fiduciary interests, (i.e., steal their land.)  Like the Black Seminoles above, and like the African Americans above, Harjo and Marpiyecher were landless farm laborers, their Dawes allotments notwithstanding.

So I think that most of the participants in the Green Corn Rebellion were tenant farmers.  I think they had different histories of tenancy and different histories of resistance.  For the Natives there was the resistance to allotment of their fathers, associated with the Chitto Harjo Creeks at Hickory Ground.  For the whites there was the Socialist Party, which received 35% of the vote in Seminole County in 1914.  For African Americans there was the move to Oklahoma itself, an attempt to escape the growing white supremacy of the governments of the deep South.  The families of Price Street and Ira Hardy were from Alabama and Texas.

What they all had in common was landlessness (tenancy rates in Seminole County were 83%!) and a reluctance to leave their families to fight in a foreign war.  It was not an antiracist movement.  The whites refused to take any Black leadership, and people seem to have joined as communities rather than as individuals.

I find no evidence that Price Street or Ira Hardy studied in the "university of radicalism" at Leavenworth.  Perhaps that, too, was segregated.  I am awaiting the paperwork from the Green Corn trials and the prison record of Black IWW Ben Fletcher.  Perhaps there will be trails to follow.  Perhaps not.  But I am still reluctant to describe the Green Corn Rebellion in a sentence.
Posted by Stones from the Creek at 6:45 AM

Stones from the Creek